Derreen
The Derreen River flows south from Lugnaquilla Mountain and then southwest to join the Slaney south of Tullow. The river holds occasional salmon in the spring but the upper reaches are better known for trout, averaging 0.5lbs. The best of the fishing is from March to June. There are two angling clubs with fishing rights on the Derreen River and the remainder is in private hands.

See also:
Catchment Map
and the other tributaries:
‘Bann and Boro’ 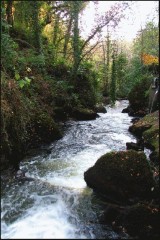 Sow
The River Sow flows down through Eden Vale to Castlebridge marsh, where it is joined by the Garrylough River and enters the Slaney on the northern side of Wexford Harbour.

As a sea trout fishery, the river used to produce several hundred sea trout each season, the best time of which is July and best stretch two miles above and below the main road bridge at Castlebridge. Angling is controlled by riparian owners.

Urrin
The River Urrin flows southeast from the Blackstairs Mountains and joins the Slaney at the southern end of Enniscorthy town. As a sea trout fishery, this river supports one angling club and day tickets are available. The best fishing is from the end of June to the end of August.

Derry
The Derry River flows south and then south westwards through Tinahely, Shillelagh and Watch House Village (and Clonegal) before joining the Slaney at Kildavin. Regarded as a spawning river for the Slaney, the Derry holds occasional salmon during the angling season and small brown trout averaging 6 ounces but is rarely fished except by a few local anglers.